Health Savings Accounts: What You Need to Know - Bim Group
Skip to content 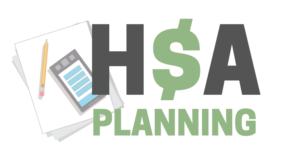 A health savings account (HSA) is a tax-exempt trust or custodial account set up with a qualified HSA trustee (such as a bank or insurance company) that is used to pay or reimburse certain medical expenses.

HSAs were first available as of January 1, 2004, and have grown greatly in popularity. An eligible individual (with or without employer involvement) can establish an HSA. Eligible participating individuals can make contributions, up to statutory limits, and get a tax deduction. Investment earnings on HSA accounts are tax free, and HSA funds used to pay qualified medical expenses are completely tax free. Employers contributing to their eligible employees’ HSAs, or that offer HSAs through a cafeteria plan also receive federal tax deductions for the contributions.

As a result of these benefits, HSAs are highly regulated; by Internal Revenue Code Section 223, as well as numerous IRS notices and guidance documents. IRS Publication 969 provides a basic overview of HSA regulations for employers and employees.

To be an eligible individual and qualify for an HSA, you must meet the following requirements.

The HDHP must provide “significant benefits;” for example it could not exclude in-patient care or hospitalizations, be a fixed indemnity benefit, or only cover certain specified diseases such as cancer.

In addition to the requirement that an individual be enrolled in an HDHP, an HSA eligible individual cannot have other disqualifying coverage. 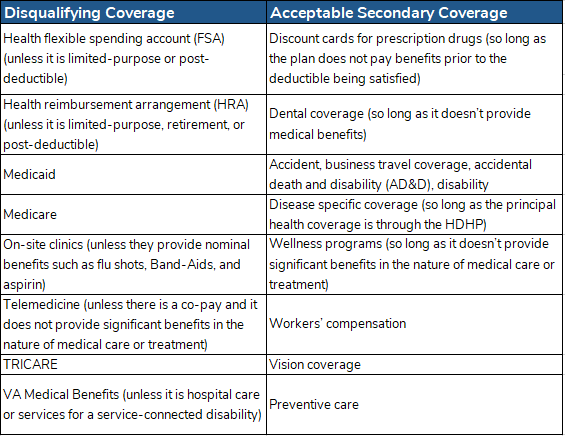 Example: Adam and Susan are married; Adam is a full-time employee at The Auto Dealer and enrolls in its HDHP. Susan is a full-time employee at The Dry Cleaner and enrolls in its HMO plan with an FSA. Both Adam and Susan enroll in single-only coverage. Because Susan now has an FSA, which the IRS allows her to spend on Adam even if she has single-only coverage, Adam is no longer HSA eligible because he is now covered by disqualifying coverage (even if Susan does not spend any of the FSA on Adam’s qualifying expenses). If Susan chose to enroll in The Dry Cleaner’s limited purpose FSA instead of the general purpose FSA, Adam could maintain his HSA eligibility.

Interplay Between Health FSAs and HSAs

When an individual has an FSA, they have coverage that disqualifies them from being HSA eligible. The question becomes, when are they considered to have “dropped” the FSA in order to gain HSA eligibility? The answer is different depending on the FSA’s plan design and whether the individual has a remaining balance at the end of the plan year.

Health FSA with a Grace Period

Some cafeteria plans allow participants to access unused FSA funds for a period of time up to 2.5 months after the close of the plan year. The grace period is a time during which additional reimbursable expenses can be incurred. An FSA with a grace period cannot allow carryovers (see below).

FSAs are now allowed to offer carryovers of unused balances of up to $500 remaining at the end of the plan year, to be used for qualified medical expenses for subsequent plan years. An FSA with a carryover cannot have a grace period (see above).

Being entitled to Medicare makes a person ineligible for an HSA, even if the person is enrolled in a qualifying HDHP.

Internal Revenue Code (IRC) Section 223 reads: “Medicare eligible individuals. The [contribution limit] under this subsection for any month with respect to an individual shall be zero for the first month such individual is entitled to benefits under title XVIII of the Social Security Act and for each month thereafter.”

Being eligible for and being entitled to Medicare are not the same. A person becomes eligible for Medicare through age, through disability, or due to end stage renal disease (ESRD).

Individuals are entitled to Medicare once they are 65 years old and they either have applied for and are receiving benefits from the Social Security or Railroad Retirement Board, or, are eligible for monthly retirement benefits from Social Security or the Railroad Retirement Board (but have not applied for them) but have filed an application for Medicare Part A.

For a person who is working and aged 65 or over to maintain HSA eligibility he or she must:

When employment-related coverage ends, a person has eight months to enroll in Medicare Part A, which, once effective, will be effective for six months retroactively, but no earlier than the first day of eligibility.

This means that if a person maintained HSA-eligibility (by waiving or delaying Social Security benefits, waiving or not applying for Medicare Part A, and not applying for Medicare Part B), then the person should stop making HSA contributions six months before enrolling in Part A and B (or before applying for Social Security benefits) because, in most cases, a person’s Medicare coverage will be retroactive up to six months from the time the person enrolls in Medicare.

Individuals who can be claimed as a dependent on someone else’s tax return are not HSA eligible.

Another complicated wrinkle in dependent status and HSAs involves whose expenses can be reimbursed from the HSA. HSAs can only reimburse the expenses of the employee, spouse, and tax dependents as defined by IRS Code Section 223(d)(2)(A) (even if the person is not eligible to set up his or her own HSA) if the expense was incurred after the HSA is established.

Example: Samuel is 24 years old and is not claimed as a dependent on his parent’s taxes. His mom, Caroline, has enrolled in family HDHP coverage through her employer (which covers Samuel) and has established an HSA into which she can contribute up to the full family amount. Samuel does not have any other disqualifying coverage, and he can establish his own HSA (although his employer is unlikely to allow him to put pre-tax dollars into it). Caroline cannot spend her HSA dollars on Samuel’s medical expenses, despite the fact that he is covered under the family HDHP. That is because Samuel is not a tax dependent of his parent.

An individual’s eligibility is determined on a monthly basis, on the first day of the month.

If an individual changes from family to single coverage during the year, the individual’s maximum contribution amount is calculated as (X/12 x $7,000) + (Y/12 x $3,500) = $____. The dollar figures used in the formula will change annually based on the IRS contribution limits.

Individuals who reach age 55 by the end of the taxable year have their contribution limit increased by $1,000, regardless of the tier of coverage they are enrolled in. This is called a “catch-up” contribution. A married couple, both age 55 or older, can make two catch-up contributions, but there must be a separate HSA for each spouse. Because HSAs are individual trusts, spouses cannot have a joint HSA (but each spouse can spend his or her individual HSA dollars on the spouse’s medical expenses).

The IRS has a “special rule” for married individuals that allows a couple to divide the maximum HSA contribution between spouses so long as one of them has family HDHP coverage, and neither has disqualifying coverage. The IRS provides the following example:

Beginning the first month an individual is enrolled in Medicare (or entitled to Medicare) the contribution limit is zero.

Employers may contribute to an employee’s HSA, but their contributions count toward the individual’s total contribution limit for the year.

A qualified medical expense incurred overseas may be paid with an HSA. Care should be taken to ensure the expense is documented and meets the requirements under IRC Section 213.

Qualified medical expenses are those incurred by the following persons.

A child of parents who are divorced (or separated, or living apart for the last six months of a calendar year) are treated as the dependents of both parents, regardless of whether the custodial parent releases the claim to the child’s exemption.

HSAs also have prohibited transactions, including the lending of money between the individual and the HSA. This means that, if an individual overdraws the HSA account (which is considered lending money), the individual loses HSA eligibility for the entire year, and will be subjected to an additional 20 percent excise tax. Federal law will require the bank operating the HSA to close it, and the individual cannot reopen the account at that bank, or any other bank, for the entire year.

HSA holders are obligated to keep sufficient records to show that any distributions from their HSA were used exclusively to pay or reimburse qualified medical expenses, that the expense was not paid previously or from another source, and that the individual did not take the expense as an itemized deduction in any year.

This information is general and is provided for educational purposes only. It is not intended to provide legal advice. You should not act on this information without consulting legal counsel or other knowledgeable advisors.

Webinar: Leave Policies and Handling Health Plan Benefits When Employees Return from Leave Due to COVID-19

You’re invited to join us for our COVID-19 Cost Impact Analysis webinar on Tuesday, May 26, 2020 at 11:00AM EST! Register Here We are without a doubt living in unprecedented times, and you probably have a ton of questions around the topic of COVID-19 and how it has (and will continue to) impact the cost of your […]
Read more
Webinar

Webinar: What Employers Need to Know about Notice and Disclosure Requirements for Group Health Plans