November was a busy month in the employee benefits world.

Read more about the draft forms and instructions.

Download a summary of the 2020 annual benefit plan limits.

The Department of Health and Human Services (HHS) issued its Annual Civil Monetary Penalties Inflation Adjustment. Here are some of the adjustments: 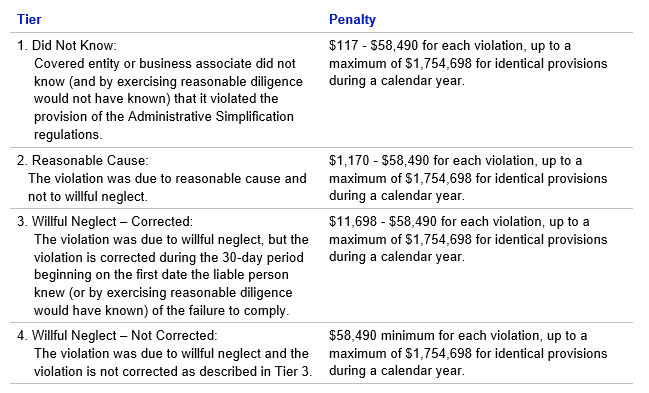 The Centers for Medicare and Medicaid Services (CMS) released SBC materials and supporting documents including a template SBC, sample completed SBC, uniform glossary, instructions, and guidance for plan or policy years beginning on or after January 1, 2021.

As background, on May 21, 2019, the Department of Health and Human Services (HHS) published a final rule and released a fact sheet to implement the conscience rights protection provisions contained in federal laws such as the Church Amendments, the Coats-Snowe Amendment, the Weldon Amendment, and the Patient Protection and Affordable Care Act (ACA).

The final rule stated that it did not create any new conscience rights protection. Individuals, health care entities (including health plans and plan sponsors), and providers are protected from discrimination in health care (based on their religious belief or moral conviction) by government or government-funded entities. The final rule requires applicants for and recipients of federal financial assistance from HHS to attest that they will comply with conscience rights and anti-discrimination laws. The final rule implemented enforcement tools, such as investigating complaints, compliance reviews, and withholding federal funds, similar to other civil rights laws, to ensure compliance with federal conscience rights protection laws.

On November 6, 2019, the U.S. District Court for the Southern District of New York (district court) vacated the entire final rule on a nationwide basis. The case consolidated three lawsuits challenging the final rule led by the State of New York, the National Family Planning and Reproductive Health Association, and Planned Parenthood. The district court found that despite HHS’ characterization of the final rule as merely a housekeeping rule that implements preexisting conscience protections enacted by Congress, the final rule is a substantive rule that creates new obligations and penalties. The court held that HHS did not have the authority to issue substantive rules regarding federal conscience protection provisions contained in the Church, Coats-Snowe, and Weldon Amendments.

The final rules establish requirements for hospitals to create, update, and make public a list of their standard charges, including payer-specific negotiated charges, for the items and services they provide. HHS released a fact sheet regarding the final rules.

The final rules on hospital price transparency are effective on January 1, 2021.

Read more about the proposed and final rules.

Question of the Month

A: The ACA requires employers to report the cost of coverage under an employer-sponsored group health plan. Reporting the cost of health care coverage on Form W-2 does not mean that the coverage is taxable.

Employers that provide “applicable employer-sponsored coverage” under a group health plan are subject to the reporting requirement. This includes businesses, tax-exempt organizations, and federal, state and local government entities (except with respect to plans maintained primarily for members of the military and their families). Federally recognized Indian tribal governments are not subject to this requirement.

Further, under transition relief provided by Notice 2012-9, an employer is not required to report the cost of coverage on Form W-2 if the employer filed fewer than 250 Forms W-2 for the previous calendar year.

Employers that are subject to this requirement should report the value of the health care coverage in Box 12 of Form W-2, with Code DD to identify the amount. There is no reporting on Form W-3 of the total of these amounts for all the employer’s employees.

The chart below illustrates the types of coverage that employers must report on Form W-2. Certain items are listed as “optional” based on transition relief provided by Notice 2012-9 (restating and clarifying Notice 2011-28). Future guidance may revise reporting requirements but will not be applicable until the tax year beginning at least six months after the date that the IRS issues its guidance. 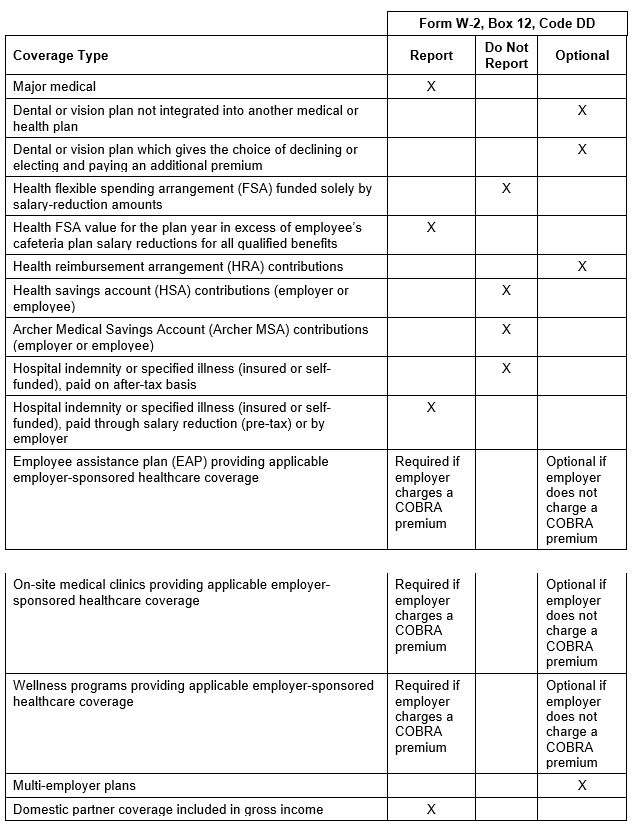 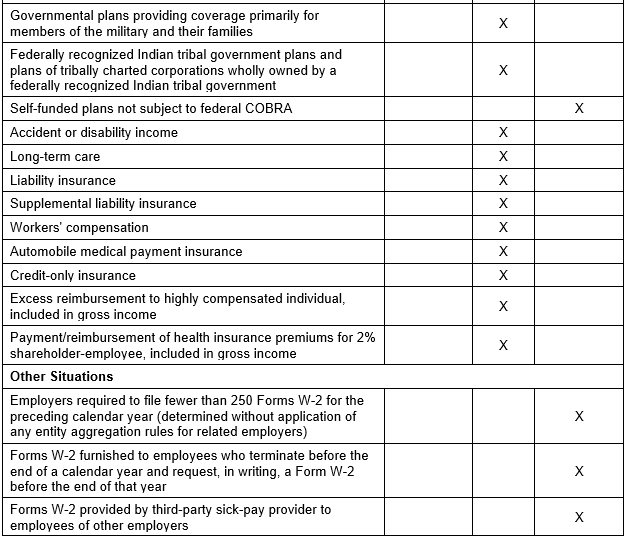 Webinar: Complying with the Final Rules on Transparency in Group Health Plan Coverage

Thank you for the confidence and trust your company has placed in Bim Group to manage your employee benefit plan throughout this challenging and at times uncertain year. As we reflect on the privilege to serve our clients, we are honored to contribute to the following organizations that make a meaningful difference in the lives […]
Read more
<!-- /google analytics embed code>